This is a live-blog report on clashes occurring in Iran on December 26, on the eve of Ashura. As reports come in, they will be placed at the top of this page. To read this in chronological order it must be read from the bottom up.

This video is of footage from Jamaran Mosque after the Basiji attack when Khatami was speaking:

Another video of protesters chanting “Ya Hossein! Mir Hossein!” and “Marg bar Diktator!”, via our friend, Tehran Weekly on Twitter:

BREAKING: Several videos have surfaced showing Jamaran Mosque, where former president Khatami attempted to give a speech but had no choice but to cancel it due to attacks from proo-government forces (Basij and plain-clothed operatives):

People chanting “Rape and barbarism, down with this regime!”

What an unbelievable day it has been in Iran. Yet again the people of Iran have shown that their green movement is resilient in the face of the darkest of tyrannies.

The situation borders on anarchy, as the people have poured into the streets in numerous cities protesting against the regime.

We end today’s live-blog with the following, before we resume our coverage of protests on December 27, the long-anticipated day of Ashura:

The Newest Deal has written an excellent analysis of the situation. Here is an excerpt.

Ever since Grand Ayatollah Ali Montazeri’s sudden death last Sunday, events in Iran have been unfolding at a dramatic pace, and with Ashura now only a day away, the regime’s fate has never been more uncertain. In fact, Montazeri’s death may end up being the seminal event that takes the Green Path of Hope from being a social movement into becoming a full-fledged and national uprising.

The regime’s handling of the late dissident cleric’s death has had two discernable effects. First, it has only expanded public sympathy for the Green cause, and particularly to a more pious demographic. The shocking disrespect Khamenei showed in his message of “condolence” by saying he would ask God to forgive Montazeri for failing his “momentous test” — a reference to the falling out the Montazeri had with Khomeini and his eventual renouncement of the Islamic Republic — has enraged many Iranians. Khamenei, it should be noted, was not even an Ayatollah when he was anointed Supreme Leader after Khomeini’s death. Montazeri, on the other hand, stood alone with Grand Ayatollah Ali Sistani as the most senior religious authority in the Shia faith. Khamenei’s recent delusions of self-grandeur have only made many religious Iranians become cognizant of a truth that Montazeri stated long ago: the Islamic Republic acts anything but Islamic.

The Supreme National Security Council (SNSC) has reportedly recognized just how ill-advised the regime’s provocation of those mourning Montazeri’s death may come to be. In a letter to the Interior Minister, the council blasts the attack on Ayatollah Taheri’s mourning ceremony in Isfahan, citing the enormous outrage it created after word leaked out and first reached Qom and then to the rest of the country. For a supposed theocracy to be targetting the clerical class is indeed telling of just how desperate (and paranoid) the regime has become.

While CNN completely fails to report on the situation in Iran, the BBC produces this insightful report. John Leyne provides astute commentary.

One source reports “they attack people with gas and electric batons. People respond ‘Death to you.'”

The military regime in Tehran is in its final days. The signs of an imminent collapse, perfectly traceable on the Iranian streets, are evading the most prominent Washington experts. The slogans on the walls, the nighttime chorus of Allah-o-akbar on the rooftops, the crowds chanting “death to the dictator,” all signaling a collective defiance despite the brutal backlash, and all reflecting a mass mobilization unseen since the 1979 revolution.

People chant: “Khomeini where are you? The Basij are killing people!”:

Crowd at Jamaran chanting “Marg Bar Toh!” (“Death to You!” directed at regime leaders) along with “Ya Hossein! Mir Hossein” and other chants:

As of 11:00PM Tehran Time it looks like IRNA removed the pic. Good thing we saved it… “Those who cheated [the election] is the ones who tore [Khomeini’s] photo.”

“Khamenei is a murderer! His leadership is void!”

“This is a month of blood. Yazid will topple!” (Yazid is a reviled dictator who killed Imam Hossein in the early days of Islam. People are associating Khamenei with Yazid.)

Picture of a man injured during today’s protests (source): Unconfirmed reports of shootings heard in direction of Moddaress Expressway.

Video showing protesters chanting, “Rape in prison? Where in the Ghoran (Koran)?”:

Another video, people chanting “This month is a month of blood. Seyyed Ali will soon topple!” Seyyed Ali refers to Supreme Leader Seyyed Ali Khamenei. Other chants: “Marg Bar Diktator!”, “Today is a day of mourning!” and “Basijis no longer have any effect!”

Video, from outside Jamaran Mosque, masses of people chanting “Ya Hossein! Mir Hossein!” and “Allaho Akbar!”:

I posted a video earlier at 8:34PM Tehran Time, then removed it due to being informed by someone that it was not from today, I am now getting conflicting reports saying it is indeed from today. I cannot confirm this yet, but I am reposting the video as multiple sources are reporting that it is from today:

Another video appearing to be the same group of people above:

More details on Khatami speech: He was supposedly either due to speak at, or had just started to speak at Jamaran Mosque, when plainclothed agents entered and started attacking people. Reports of masses gathered outside the mosque chanting anti-government slogans, while many move towards and carry protests to Niavaran.

There are unconfirmed reports coming in that former president Khatami was about to speak when plainclothed security forces (regime thugs) started attacking people with chains, forcing him to cancel his speech.

Removed a video posted at 8:34PM showing people chanting against Velayateh Faghi as it was brought to my attention that it was not from today.

There are reports of Khamenei’s residence in Tehran heavily surrounded by security forces.

Here is a video protesters in Kashan chanting, “Ya Hossein! Mir Hossein!”:

A witness said at least two people were wounded when the police chased protesters into the downtown building.

“They fractured the skull of one ISNA person and badly beat up another employee,” the witness said. ISNA’s news service appeared to be working normally, and its reports made no mention of security forces breaking into its building.

Video showing security forces arresting someone, people chant “This month is a month of blood. The Basij will topple!”:

Another video (via Mehdi Saharkhiz):

There are reports that a group called Mourning Mothers have been attacked in Laleh Park in Tehran.

And, another video of protests today:

Less intense than the video below showing shots being fired by government thugs, a video of people on a bus chanting anti-government slogans:

This picture was just posted showing heavy policy or government security forces in the streets. This has been reported to be from the summer and NOT today (thanks to commenter Atlat2). Video surfaces showing regime forces on motorcycles on a sidewalk and people dispersing:

A report has come in that police attacked people ouside of Africa Cinema in Vali-Asr Street.

The Basij ransacked the dorms immediately following the rigged presidential election in June as well, when unrest first started to break out.

Tension between the government and the people of Iran is at an all time high. The coordination taking place between people, the solidarity being displayed, and the breadth and depth of the protests is unparalleled in the 30 year history of Iran since the formation of the Islamic Republic.

Events do not bode well for Khamenei and his government. In fact, the protests that originated only in the context of a rigged election six months ago, in which people were just asking, “where is my vote?”, have metastasized into full-scale rejection of Khamenei and the concept of Velayateh Faghih (Supreme Jurisprudent) in which one person is the Supreme Leader and acts as sole representative of God on earth, ruling in wait for the return of the Twelfth Imam.

One day before the heavily anticipated day of Ashura, for which huge protests are expected during the Shia mourning ceremony, the situation cannot be more tense. The momentum is in favor of the green movement as 6 months of brutality and sabre-rattling against the people by the regime have done little to stop movement.

A report has come in that ISNA (Iran Student News Agency) has been attacked by government forces chasing protesters that attempting to hide.

Third video out of Tehran today:

Reports on clashes throughout various cities in Iran continue to come in, but new information is coming in more slowly now. Will continue to monitor the situation and will write a full report, providing context in several hours. For now, this live-blog is paused. I will provide a link to my report on the day’s events on my Twitter account here, IranNewsNow on Twitter, when it is ready.

Clashes now being reported in Qom, Najafabad (in addition to Tehran, Esfahan, Mashad, and Kermanshah).

EDIT: Removed picture posted at 2:01PM of Police deployed in Tehran.  It was not from today.

People are marching towards Enghelab and Azadi Squares but are meeting with heavy anti-riot police and security forces presence and confrontation.

Basiji’s dressed in black are chanting they will be martyrs against protesters for their leader’s sake.

Clashes reported in the Shire-khorshid Square in the Kermanshah as people chant against the regime.

Clashes being reported now in Mashad. So far Tehran, Esfahan, Kermanshah, and Mashad are reporting clashes between government forces and protesters.

Heavy clashes now being reported in Enghelab, Ferdowsi, and Baharestan squares in Tehran.

Clashes being reported in Kermanshah. Reports of women being beaten badly by security forces in multiple locations. 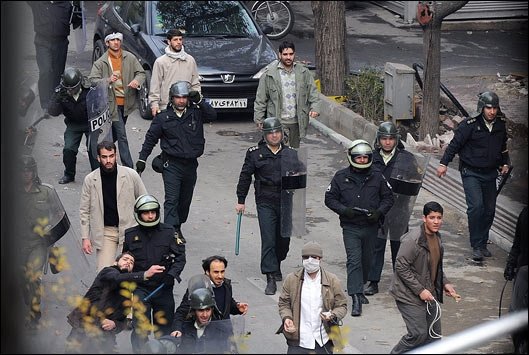 Some reports show that there are tens of thousands of people in these regions.

Among slogans: “Khamenei is called Yazid; Bad reputation for Yazid.”

Reports of gunshots being fired.

Reports coming in of “fire-engines” going through all parts of Tehran.

Security forces are asking people to keeping moving and telling them, “If you sand, we’ll arrest you.”

A heavy crowd has gathered near an area called Satarkhan, but so far they’re just walking. People are expecting more will join in soon.

In some areas where cars are honking, basiji’s in black are walking between the cars trying to get them to stop, but the honking continues regardless.

One person states, “Government has totally lost the control, people are victorious so far.”

People are reporting that some of the anti-riot or government forces are refusing to confront the protesters.

Chants of “Down with the Dictator!” being reported at Enghelab Square.

From Esfahan, a video of police clashing with people:

Reports are coming in from multiple sources that there are protests occurring in Iran right now. Clashes with anti-riot forces have been reported, with one report of a woman being between unconscious.

One source from Iran reports that Sharif University is full of Basij forces and should be avoided.

Another reports that Tehran is apparently full of anti-riot forces.

And yet another person reports that the sound of cars honking in the city is defeaning.

We don’t know more than this at this time, but will follow the situation closely and report on developments in the live-blog.